About the Batavia Bicycle Commission 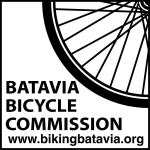 The Batavia Bicycle Commission (est. 2009) acts as an advocate to the city government in developing legislation that supports bicycling and participates in other activities as they relate to bicycling and pedestrian related issues in the City of Batavia. It also acts as a resource to the city government as it approves and evaluates policies and standards in regards to implementing the  City of Batavia Bicycle Plan and future growth of the Plan.  The Commission works with the community at large to help develop educational and informational programs, events and materials to promote safe biking and pedestrianism.

The City of Batavia Bicycle Plan was written and approved by the City Council in 2007.  The Plan contains many suggestions on how to make Batavia a safer and friendlier place for bicyclists. Some of these suggestions include friendlier crossings, bike lanes, clearer markings and signage, creating an awareness program, and building upon the existing safe routes to schools program.

The Batavia Bicycle Commission is made up of eight Batavia residents. Current members include:

Additional support provided by Randy Diecke serving as City Liaison, and Evan Thomas serving as director of Bikes for Batavia.

Find out a little more about our members here.

For questions, please go to our Contact Us page.  Monthly Commission meetings are held the second Monday of each month at 7:00 pm in Batavia City Hall.  Anyone is welcome and encouraged to attend.  Please see the City’s official calendar for meeting updates.

Increasing bicycle use in Batavia can provide many benefits. Some of the benefits include improving the environment, reducing congestion, saving lives, increasing social community participation, boosting the local economy, enhancing recreational opportunities, saving city funds, enhancing public safety, and improving health and well-being.  The importance of establishing the Commission is reinforced by the more than 5,000 bicyclists who pass through downtown Batavia during summer weekends.  The Commission also helps Batavia to tap into grant money available for bikes.

Batavia is a Bike Friendly Community

In 2013, the City of Batavia was designated as a Bike Friendly Community (bronze level) by the League of American Bicyclists.  Currently only 6 communities in Illinois are designated as Bike Friendly Communities. For more information about Batavia's designation, read the October 13, 2013 League of American Bicyclists' press release below:

An increasing number of city leaders in communities across the country, including the City of Batavia, are embracing the environmental, financial and quality of life benefits that come with being a Bicycle Friendly Community.  They are recognizing that bicycling can be the solution to many community challenges.  Today, the League of American Bicyclists is announcing the latest round of Bicycle Friendly Community (BFC) awards and Batavia has been named a bronze level BFC.

"Batavia is playing a critical part in creating a truly Bicycle Friendly America," said Andy Clarke, President of the League of American Bicyclists.  "We know Batavia's investment in bicycling will be returned many times over in health, environmental, and quality of life benefits of a thriving community."

The BFC program is transforming the way communities evaluate their quality of life, sustainability and transportation networks, while allowing them to benchmark their progress toward improving their bicycle-friendliness.  With this impressive round, there are now 291 BFCs in 48 states across America.  The bronze level BFC award recognizes Batavia's commitment to improving conditions for bicycling through investment in bicycling promotion, education programs, infrastructure and pro-bicycling policies. Mayor Schielke has said,

"We are very excited over the recognition of Batavia's efforts to promote safe bicycle use in our community.  As the hub of the trail system in the area, it is up to us to show how cycling can mesh with other forms of transportation to encourage healthy living and provide enjoyable recreational activity for all at modest cost.  How often can a community add to the quality of life while at the same time attract economic development in a manner that is both efficient and environmentally responsible?  We can't wait to reach platinum status."

The BFC program provides a roadmap to building a Bicycle Friendly Community and the application itself has become a rigorous and educational tool in itself.  Since its inception, more than 500 distinct communities have applied and the five levels of the award - diamond, platinum, gold, silver and bronze - provide a clear incentive for communities to continuously improve.  To learn more about the free BFC program visit bikeleague.org/community.